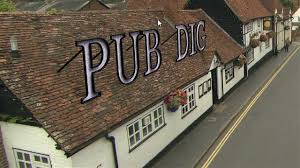 The critically acclaimed archaeological series Pub Dig, co-presented by the comedian Rory McGrath and Paul Blinkhorn, Saxon and Medieval pottery expert, will be shown on terrestrial television on Tuesday 3rd April at 8pm on Channel 5. For those of you who missed the first airing on the History Channel or would like the opportunity to catch the series again, make sure to pour yourself a pint and tune in for the first episode at the Command House pub in Chatham, Kent.