We’ve kept the final discoveries from Trench B a little quiet while excavation was being completed, as it was something we didn’t want too many people to know about while they were still exposed. Everyone who was on site with us knew about them, of course, but were asked to keep the news to themselves and especially not to let it out into cyberspace.  But all excavation and recording is now completed and the site has been backfilled.  The cut features we were puzzling over – thinking they might either have been rubbish pits or part of a building – turned out to be at least two graves. This was a remarkable discovery, especially given that this trench lies some distance from where the human bones were found in the 1950s. 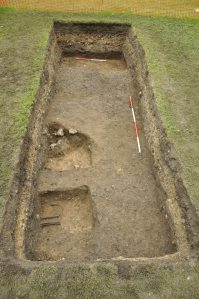 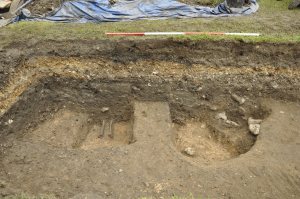 Closer image of the graves in Trench B, with the foot bones of the northerly inhumation visible in the section of the right-hand grave.

Although we only found the lower legs and feet of the skeletons, we were able to deduce a lot about them from this.  Firstly, we were able to see that they were lying flat on their backs with their heads to the west  and their feet to the east. This is the way Christian burials are arranged, so we could be confident they are Christian, and therefore Anglo-Saxon or later. All the pottery in the grave fills (as far as we can tell from the quick assessment we’ve been able to make so far) is Thetford ware, dating to 850-1100 AD, so these people must have been buried sometime after 850 AD, and probably before 1100 AD because there doesn’t seem to be any later pottery.  So they may belong to the Anglo-Saxon or early Norman period.  When Cat Ranson looked at the bones, even with just the lower leg and foot bones exposed, she could tell that one of the individuals was an adult when they died, but the other was aged around 10-14 years old.

The realisation that the cuts were graves caused us to reassess the sub-circular stone feature we had previously thought might be packing for a post-hole associated with a building. This feature is cut into the side of the adult grave, and looks very much like a stone-lined cist burial for a small baby. We didn’t note any human bones when we excavated the feature, but infant bones are very small and thin and can easily dissolve away completely in the ground, so this absence is not significant.  Leaving aside mass burials resulting from battles or epidemic disease, multiple graves are very uncommon in the medieval Christian tradition, but by no means unknown.  However, when they do occur, at least one of the individuals in the grave is almost always a child, as would have been the case here if the stone feature is indeed an infant cist burial.

In finding these remains, we have got as close as possible to the people who lived in the Clare perhaps a thousand years ago.  And in addition, by using archaeological excavation to excavate and record these burials, we have for the first time provided proof to support the many rumours that there were human burials here – and established that these are of medieval date.

The implications of the discovery of the burials at Clare Castle are many, and have set our minds racing!   Firstly, the regularly-arranged, neatly parallel arrangements of the graves, along with our knowledge of medieval burial practice tells us that our two (or three) individuals are not going to be isolated  burials but would have been interred within a cemetery – therefore, we are sure there will be other graves in the same area.  In addition, we can deduce that there must have been a church located very close by.  We were already speculating that the high-status painted glass-windowed building unearthed in Trench D might be the castle chapel before we found the burials, and it is tempting to think this might be the church in question. However the burials are a little to far away for this to be a dead certainty. In addition, the building appears to be constructed in the 12th century, making it later than the most likely 9th – late 11th century date of the burials.  We really need to await the results of the pottery report to consider this any further, not to mention radio-carbon dating of the bones if this is possible.  But at the moment, I think it most likely that the church associated with the burials we found was a separate building, most likely located north or west of the burials.  This church is likely to be of pre-Norman date: it may be the church of the historically recorded priory (although the presence of such a young individual(s) make this less likely), or it may be an earlier parish church. We then of course begin to wonder what happened to this church when the castle was built?  Did it continue in use, and if so did it become a private chapel for the use of the household of the fitz Gilbert Norman lords of Clare, or did it continue in use as the parish church of the townspeople as well?  These two different possibilities paint very different pictures of the impact of the creation of the castle on the town, and the relationship between the two populations.

It’s all left us within even more to think about than we already had! In the meantime, the skeletons have been left where we found them, and Trench B (along with all the others) has been backfilled.  Now the post-excavation analysis begins…

At this point, I’d like to say a huge thank you to everyone who’s been involved in the excavations, in any way at all. To the volunteers on the excavations who worked so well, to all the archaeologists who helped supervise and run the excavations, to Chris and Dan from Managing A Masterpiece, to everyone who contributed to the end of dig lunch today, and to the many, many Clare residents and other visitors who were so friendly, supportive and helpful: it would be impossible to list everyone, but thank you.  We are all hoping it will be possible to come back and involve more of you in answering some of the many questions the 2013 excavations have begun to raise!  And thanks, of course, to the Heritage Lottery Fund who (ultimately) provided the money for the 2013 dig.