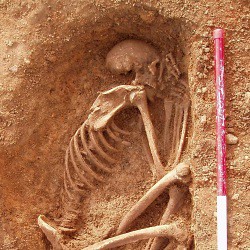 On 23rd September 2014, Richard Mortimer will be talking to the Fen Edge Archaeology Group about Oxford Archaeology East’s excavations on Oakington Recreation Ground and around the village over the last five years.

In this talk, he will put them into context with earlier excavations and chance finds. A large and complex Early Anglo-Saxon cemetery has been completely excavated alongside settlement evidence spanning the 7th to 13th centuries. Oakington is located on a major prehistoric and historic routeway, a routeway which corresponds to an equally significant terretorial boundary. Cottenham will obviously get a couple of mentions, as will Willingham.

Richard Mortimer is a Senior Project Manager with Oxford Archaeology East and has been excavating for the last 30 years, 20 of these in the Eastern region. His personal research, when he  gets time to do any, is either focussed on the Middle Bronze Age (1500-1200 BC) or the Middle Saxon Period (AD 700-900).

The talk will begin at 7:30pm at Willingham Baptist Church (George Street, Willingham, CB24 5LJ) and all are welcome.

One thought on “Anglo-Saxon Oakington: Settlement and Cemetery in the Borderlands”