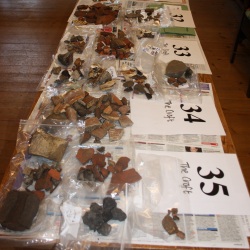 Last month, over 200 school pupils, local residents and volunteers were involved in digging 31 archaeological test pits in the Suffolk town of Sudbury. Paul Blinkhorn, specialist in post-Roman pottery, has completed his report on the pottery found in the test pits which can be downloaded from the ACA website here. The pottery results have also been added to a map of the town to show the distribution of pottery of different dates which can be viewed here.

In stark contrast to test pit excavations run by Access Cambridge Archaeology at Long Melford and Nayland, neighbouring Suffolk wool towns, the Sudbury pits revealed evidence for occupation during the Early-Mid Anglo-Saxon periods. Several sherds of hand-made Early Anglo-Saxon pottery (450 – 700 AD) were found in the test pits dug between Christopher Lane and Friars Street, including one sherd from an undisturbed context. Sherds of mid-Saxon Ipswich Ware (720 – 850 AD) were also found but elsewhere in the town, on the Croft by the parish church of St Gregory and on Church Street, close to All Saints Church.

You can read more about the Sudbury test pit excavations in the original news post here.

This work is licensed under a Creative Commons Licence. If you use this content on your site please link back to this page.