ACA’s third Higher Education Field Academy (HEFA) of 2015 was held in Brundall, Norfolk. 36 Year 9 and 10 pupils from Aylsham High School, Taverham High School and Broadland High School and 1 Year 7 pupil from Jane Austen College excavated 10 test-pits spread throughout the village. Local residents also joined in to dig pits in their own gardens. All of the pits were organised by Jacky Heath and Ann-Marie Simpson of the Brundall Local History Group. St Laurence Church served as the base for the two days of excavation. This is the first year ACA have held a HEFA in Brundall, however, a second field academy will be held here in June with pupils from OpenOpportunity Norwich. It is anticipated that local residents will again join in with digging their own test pits in June as well. 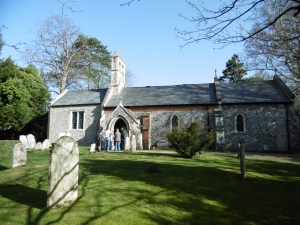 Brundall is a small village east of Norwich on the bank of the river Yare. The 10 x 1m2 test pits were spread throughout the village on Postwick Lane, Roman Drive, The Street, Brigham Close and Chancel Close.

The students worked in mixed-school teams of 3 or 4 and were supervised by teachers and local volunteers. After receiving a briefing on Day 1 by Dr Carenza Lewis, Director of ACA, about how to excavate and record the test pits, the students went on to make excellent progress throughout the two days of digging.

Spirits remained high even though some pits had particularly difficult layers to get through, including coming down onto the brick foundations of an old greenhouse! We were also pleased that the Eastern Daily Press sent a reporter out on Thursday 16th April to cover the event. That news article is available here 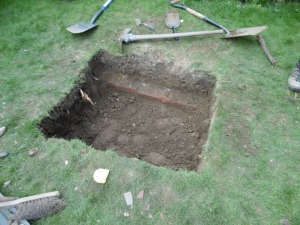 The students record all of their findings context-by-context in their individual Test Pit Excavation Record Booklet. This is not only an invaluable asset in helping to produce their written assignment, but also informs academic research and becomes part of the permanent record about each test pit kept on file at the University of Cambridge. One pupil nicely summed up their HEFA experience by remarking, “I enjoyed finding objects that help our understanding of Brundall and I have gained experience of creating theories for the past.” (SP)

Test Pits 6 and 7 located on Chancel Close both had Bronze Age pottery and burnt flint which suggests potential prehistoric activity, especially as they’re located on higher ground overlooking the river Yare. A find of particular note was a sherd of decorated Early Anglo-Saxon pottery, possibly from a cremation urn. This sherd dating to the 6th-7th centuries AD is only the second of its type found in the more than 2000 test pits dug over the past 10 years as part of ACA’s HEFA programme. Not bad for 1 in 1000 odds!

As this is the first series of test-pitting in Brundall it is difficult to ascertain an overall picture of how the village has developed. Although Brundall is mentioned in the Domesday Book of 1086, only one test pit (TP 6) yielded any Late Saxon Pottery. The High Medieval to Late Medieval pottery finds, though, seem to suggest a shifting of the occupation from the west of the village to further east along the modern-day line of The Street. The second Brundall HEFA in June will aim to have its test pits located in different parts of the village to provide a more encompassing view of the village’s development.

On the third day of the HEFA, the students arrived to a beautifully sunny day in Cambridge. Carenza’s morning lecture on medieval settlement studies and the Currently Occupied Rural Settlement (CORS) project again proved to be popular with many pupils commenting that they really enjoyed “learning how research is done” (LC) and “I enjoyed learning about medieval settlements and historical artefacts”. (FJ) 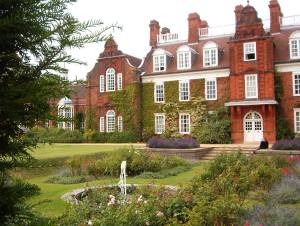 The students then split into groups for lunch and a tour at one of Newnham, Pembroke, Peterhouse and Corpus Christi Colleges. The two-hour afternoon session was comprised of a talk from Dr Sam Lucy, Admissions Tutor and Financial Tutor from Newnham College, about the University of Cambridge and life as a university student. This was followed by a presentation on how to structure and present a written account of the excavation. 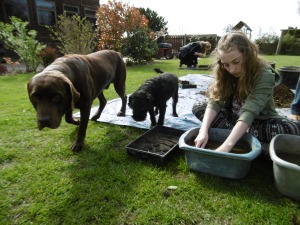 In feedback after the HEFA, 100% of the participants rated the field academy as ‘excellent’ or ‘good’. The students enjoyed visiting and learning more about the University of Cambridge, working as part of a team with new people from different schools and contributing to valuable university research. Students commented “HEFA was amazing! A great and informative experience.” (JS), “My HEFA course has helped me to understand the world around me through the support of the HEFA team” (GLS) and “It has really given me an insight into how university works.” (HW) One staff member said “I think the students loved the fact that they were doing something not done before and recording something that will be used by the university. They have gained new skills, more self-reliance and motivation. For many it’s really helped inspire or confirm for them that university is what they want to do.” (MR)

ACA would like to thank all the students and staff of the 4 schools involved. Special thanks to Nigel Roberts, beacon school coordinator, and Jacky Heath and Ann-Marie Simpson, local coordinators.