The close of the HEFA season is upon us, and we will be sad to pack up our shovels but we’re still out and about with schools until the end of term. This week it was a new HEFA site for us, but a return to the village of Clavering. Back in 2012 Clavering hosted their own community excavation with 29 test pits strung out across the winding settlement. Families and even local celebrities (chef Jamie Oliver) joined in, the full report of which can be found here. Local co-ordinator Jackie Cooper was keen for us to return and at last we have managed to do so, adding another 12 test pits to the data we already have. Pupils from Hertfordshire and Essex school, Burnt Mill Academy, Forest Hall School, The Bishops Stortford High School, Passmores Academy and Davenant Foundation School were a delight to host and got stuck in to the excavations and showed and eagerness to understand the wider project behind their own experiences. 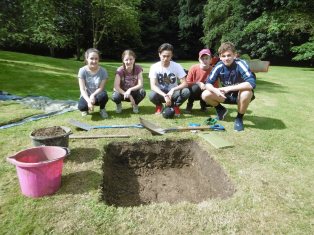 The day started with a talk from Cat Collins on how to excavate- many of the skills needed to successfully complete the Higher Education Field Academy are completely new to the students but they rose to the challenge amiably. From using a mattock safely and efficiently to recording and identifying finds it’s great to see the pupils working well outside their comfort zones. This year the test pits were also supervised by 6th form students who were able to improve their leadership skills and build a happy working environment for their teams. Test pits were spread out along the village on the Druce, Pelham Road, Stortford Road, High Street, Middle Street, Church End and Pond Manor.

The Access Cambridge Archaeology team were out in force this week with Cat Collins, Emily Ryley, Paul Blinkhorn and Jess Rippengal all touring giving advice. Bone specialist Jess was on hand to advise on the full dog skeleton that was found. Paul toured the village as usual dispensing advice on the age of the pottery found by the students. Even tiny fragments can help to date the archaeology we find and it was great to see a range of material appearing.

By the end of two draining days the students had found a wide range of finds. A modern brick feature was found in Test Pit 11 which may have been the edge of a well or cess pit but. Possibly related to the prior use of the site as a pub, a large amount of broken stems from clay pips were found, including the bowl of a clay pipe with a pattern of bulls horns and other fragments of Victorian food and drink containers. Nearby Test Pit 12 included evidence of what was a medieval smithy with large amounts of slag from iron processing as well as medieval pottery by which to date these finds. Test pit 2 also discovered medieval pottery alongside small sheep bones. Sheep in the medieval period were much smaller than today, before modern breeding techniques were introduced. Moving into even earlier periods we were fortunate enough to excavate in Clavering Primary School where they found the only Roman pottery of the HEFA but also Bronze Age pottery, worked flints and burnt stones. Water and food used to be heated by letting stones heat in the fire and then dropping them into bowls to heat their contents and are further evidence of pre-historic occupation. Test Pit 2 also had a few worked flints and together these pits on the high ground south of the river running through Clavering give us a glimpse into the early occupation of this site. 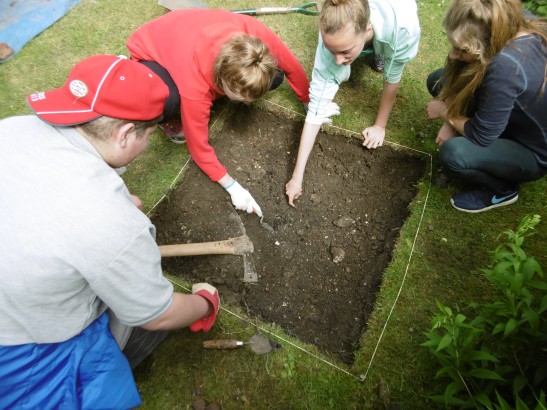 Pleased with their findings the students enjoyed their last day of the field trip in Cambridge where they swapped knowledge of what they found and had been found in previous years with a lecture from Debby Banham. Tours of Trinity and Corpus Christi colleges followed where students enjoyed a great lunch before hearing about university life from Sam Twells, Schools Liaison Officer at Corpus. Finally a lecture from Jenni French rounded off the day with students being shown how to write in an academic style appropriate for GCSE, A level and University work. The students will receive a grade and certificate for their work and it is a great chance to get feedback on their report before they have to submit marked GCSE coursework. Students and staff feedback was very positive, praising the chances to access this valuable opportunity, practice analytical and physical skills as well as make new friends. 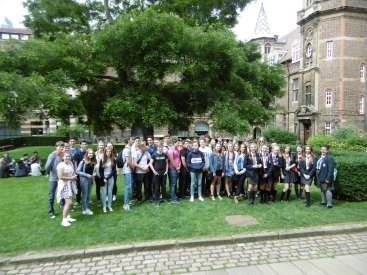 We look forward to another year’s successful excavation in Clavering!