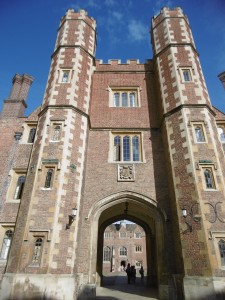 Last week, the Division of Archaeology at the University of Cambridge, organised a summer school event, kindly paid for by St Johns College, for prospective Cambridge University archaeology undergraduates who have just completed Year 12 and are about to start applying to university.

A total of 43 sixth-formers attended the summer school, coming from both state and private schools across the UK and abroad. Dr Martin Worthington, a lecturer in Assyriology and a fellow of St Johns College and Laure Bonner, former ACA administrator and now the Outreach and Communication Officer for the Division; organised the event, which took place over four packed days where the students stayed in St Johns College and received many talks and taster lectures as well as various tours and practical sessions about the different components of studying archaeology at Cambridge.

For two of the days, the students were also given practical excavation training in Jesus College, organised by the Cambridge Archaeological Unit (CAU) with help from ACA, where the students opened five 1m2 test pits in the north-west corner of the college and behind the current graduate accommodation that fronts Lower Park Street (Map of test pits). Cat Collins of ACA also gave the students an introductory briefing the day before the digging, to prepare for the dig and relevant health and safety guidance.

Craig Cessford from the CAU as well as both Emily Ryley and Cat Collins from ACA were on hand for both days to advise and guide the students, who undertook the whole excavation process themselves. The test pit excavation and recording was based on the test pitting strategy that ACA undertake with year 9 and 10 students from local schools throughout East Anglia as part of the Higher Education Field Academy (HEFA) programme. The students digging in Jesus College de-turfed, excavated, sieved and washed all the finds, recorded the test pit and then backfilled within the two days. 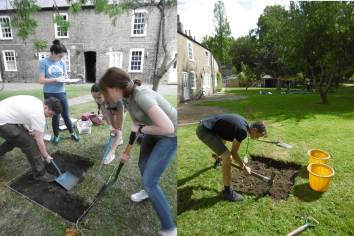 Previous excavations by the CAU at Jesus College had found multiple phases of occupation on site dating from the Neolithic and Bronze Age with both worked flints and Beaker pottery found, but the first phase of significant archaeology in the area was Iron Age ditched enclosures, with a later Roman field system potentially contemporary with the Roman cemetery that was excavated from property basements nearby.

A Benedictine nunnery was founded on the site during the early 12th century, dedicated to St Radegund and  lay outside the city boundary, the Kings Ditch, just to the east. The nunnery lasted until the late 15th century, when it was already in a bad state of repair and it was the initiative of Bishop John Alcock of Ely to use the dilapidated church and buildings to found a new college. Jesus College was named for the chapel that was originally part of the nunnery. 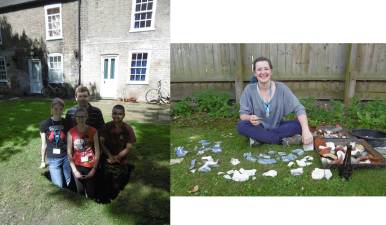 All five test pits yielded a number of finds, test pit one at the far western end came down onto a large dump of material with large fragments of plates and dishes that one student in particular was very keen to try to put it all back together! The test pit was located near to the service passageway and the access gate so this part of the garden may have been used by all as a place to dispose of rubbish within a planting bed or similar feature and contained common types of table wares of the era as well as three infant feeding bottle fragments that at least shows that the servant accommodation here may have been multi-generational.  Test pit two was one of the deepest excavated although was still in top soil at 0.8m and it too had a range of post medieval and later finds including a marble and a bone handle fragment with possible writing engraved on it. A number of fragments of medieval pottery were also found.

Test pit three was the central pit along the back of the cottages and through which two thin lead pipes were found along the western half of the pit which subsequently restricted the digging but a number of large fragments of butchered animal bone were discovered as well as more personal artefacts such as a slate pencil, part of a toothbrush and a likely bone parchment pricker. This would have been primarily used to prick holes down the edges of parchment as a guide for ruling lines and would have likely dated from the 13th-14th century. A white/yellow brick wall, with at least f0ur courses remaining was found through the middle of test pit four. The wall was angled at right angles to the 19th century cottages and the scarring visible on the Lower Park Street terrace houses suggests it would have likely have been a boundary garden wall to the back yards and would have stood at least 1.5m tall.

Test pit five was the eastern most pit excavated at Jesus College and may have actually been outside the original house garden boundary as there was a distinct change in the soils, with not much in the way of top soil but a lot of likely builders disturbance. Craig also taught a few of the students about taking levels of the site for the final report and then all the test pits were augured before final recording and backfilling. The auguring determined the approximate depth of the natural in each test pit, which for the majority was over 2m in-depth and would not have been reached within the confines of the test pit and the time available. These excavations have therefore demonstrated the depth of build up of the ground, potentially both through episodes of flooding as well as from human activity.

A number of inferences can be made from the test pit excavations; five sherds of Roman pottery were excavated and suggest that this area of the college lay within the surrounding Romano-British field systems or some other peripheral landscape to the Roman town of Cambridge. A single sherd of Late Anglo Saxton Thetford-type ware pottery was also found with 24 sherds of 13th-15th century pottery, all of which was mixed in with the 18th-20th century material, although it was predominately found through the lower layers of the test pits and suggesting further non-intensive and peripheral activity outside the town of Cambridge and associated with the nunnery and/or college. The bulk of all the material excavated from the excavations dated to between the 18th and 20th centuries and is broadly typical of assemblages of this date that have previously been found from Cambridge. Interestingly though there are two possible examples of collegiate ceramics that were also recorded from the test pits; one depicting a name that may relate to Jesus College but the other clearly shows the fountain from the Great Court at Trinity College.

The pdf of the full report can be downloaded from here: 1347 JTP16 Lower Pk St Jesus College-1

A number of lecturers and staff from the Division of Archaeology also stopped by during the excavation and chatted with the students, answering questions and giving further insights into studying at the University of Cambridge. Feedback from all the students who took part in the summer school was also very positive with just over 90% of the students rating the excavation portion of the summer school was ‘excellent’ and a number of students also stating that they specifically enjoyed the test pit digging over the other activities. One student, when asked ‘What aspects did you enjoy?’ said; “I enjoyed everything. I liked the dig as I had never done that before and it was an amazing experience”, whilst another student stated “The excavation, learning about the different aspects of archaeology and putting it into practice” and from another: “The excavation was enjoyable to get some hands on experience”. 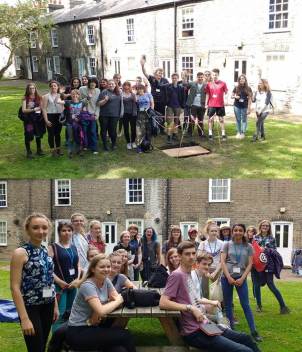 Many thanks must go again to all involved with organising and helping out with the summer school during the week and for St Johns College who funded the event. Thanks also to the many kind people of Jesus College who allowed all the students to dig and all in the Division who came to support both the CAU and ACA.