Another new site this week as we’re in the charming village of Botesdale, which merges gently into the next village of Rickinghall. 24 pupils from King Edward VI School and Sybil Andrews Academy arrived promptly on ter first day, keen to get started and were soon away at the 6 different test pits, getting down to their first contexts. The test pit sites were arranged by Cat Collins alongside the local history society. We had much interest from the local community about the excavations so hopefully we’ll be able to return next year.

Emily, Cat and Alison toured the test pits in the morning, seeing that all teams were working well together. Two of the test pits were being supervised by 6th form students, who were able to gain valuable leadership and management experience, helpful to their current university applications. One of the test pits, was sited in the garden of the old grammar school, originally a chapel, during the dissolution it was turned into a classroom. Possible fragments of the original stained glass were found by the students excavating. Two other test pits were located in the grounds of former pubs, and found fragments of German stoneware (often used for drinking vessels), clay pipes, and lemonade bottles. Test pit 2 found the remains of a chalk floor layer, probably relating to the use of the area as the yard for a coach house, a chalk floor being a method for laying down a new, clean floor. Finally test pit 6 found the base of a wall, possibly foundations of an outbuilding, long since demolished. John Newman was touring the test pits giving expert advice on the finds from the day. As well as some medieval pottery test pit 3 also found some more unusual items such as wig curlers, and a huge bone, probably from a horse! A photographer from the Bury Free News also arrived to document the students efforts and a story should appear in the newspaper sometime next week.

Half house, half chapel

All about the paperwork 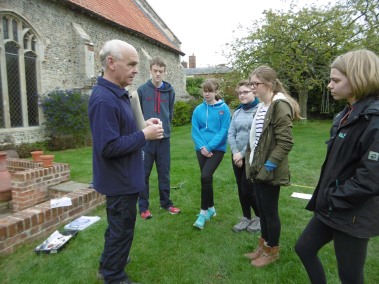 Day 3, and the students arrived in Cambridge to apply their practical experience

to the wider body of archaeological knowledge. Emily Ryley gave the morning’s lecture on the wider aims of the ILAFS programme, and spelling out the archaeological questions the students might like to tackle in their written reports. The written reports the student complete are very valuable to the learning experience of ILAFS, as it demonstrates that link between the classroom and future careers; applying skills and knowledge in a completely new context and producing written documentation of that. Hopefully full of knowledge of how to start tackling their projects, the students were treated to lunch at Newnham and Emmanuel Colleges. After some very tasty food, they were given a tour of the college, including seeing students bedrooms, which one pupil commented were “nicer than he thought they would be, not dark and small at all”. Good to know we treat students well then. Back to work and it was on to the Museum of Archaeology and Anthropology, were pupils were given a task to examine the museum’s collections and then present to the others, what they could learn about that culture’s settlements and resources from the collections. For instance, one team were show the Roman Cambridge collection and were able to reflect both on local industries, and trade from across the Roman region. Another looked at the Indus valley in Asia and discuss religious beliefs and settlement patterns there. It’s really great to be able to give pupils something to focus on in their visit, and relate their learning to what they are seeing. From the day the students get a very well-rounded experience of university life, and study. The two 6th form students who had helped out supervising younger pupils on previous days were also able to get some dedicated time to go through personal statements, applications, and other pressing questions, as well as a private tour of the department and its laboratories. The year 9 pupils were also given a more general talk on university, demonstrating how they could start thinking about their own subject choices and where they would like to go later in life.

Of the experience, pupils said they enjoyed “interacting with professional archaeological techniques” OM -King Edward VI School. “I really enjoyed looking at all of the things we found and trying to work out how they were used as a group.” IS- KEVI. Some pupils commented that they were able to form new friendships in their test pit groups, others that they gained entirely new skills, or became more proficient in organisation, and communication. The pupils were a credit to their schools and look forward to reading their written reports.

Our report on the pottery and other details can be found on our website here. Finally we would like to say a big thank you to our local co-coordinators in Rickinghall & Botesdale and we’ll look forward to returning next year! 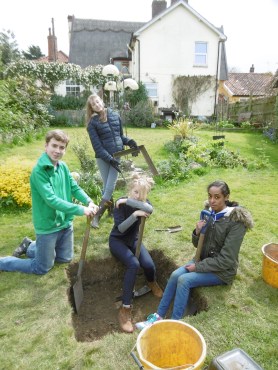