It’s another new site for us this week as we’re running the first of two Independent Learning Archaeology Field Schools happening in Lincolnshire this year. Old Clee was once a small village, based around the 11th century saxo-norman Church, which has now been absorbed into the growth of Grimsby. Pupils from Ormiston Maritime Academy, Caistor Yarborough Academy and Oasis Wintringham Academy however were primed to uncover the history and development of Old Clee from beneath the veneer of recent development, and give us a clearer insight into the origins of the settlement. 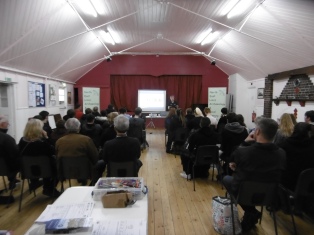 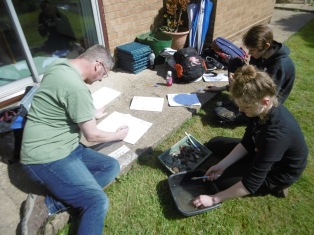 Alison Dickens, manager of Access Cambridge Archaeology welcomed the year 10 students from 3 local academies, explaining how the next three days would work practically, and also what the pupil’s could hope to achieve. The ILAFS programme is designed to inspire pupils on to higher education, by giving them the skills to take control of their own learning, giving them an experience of learning outside the classroom and boosting their confidence by seeing themselves achieve at a task completely new to them. The Day 1 talk sets them up for this, by explaining not only the practical skills of excavations, but also the key ideas to start interpreting the archaeology they discover. When a student find their first piece of pottery, or fragment of metalwork, we try to get them to think about what it could mean more widely. Where was the object made? What can it tell us about trade, status, access routes, in the past? Was this an agricultural, or manufacturing area? How has the natural landscape influenced the activities in the area? Keen to start answering these questions 29 pupils, divided into teams of 3 or 4, set out to excavate 8 test pits located on Church lane, St Mary’s Close and Greetham’s Lane.

Clever construction of a shelter at TP6 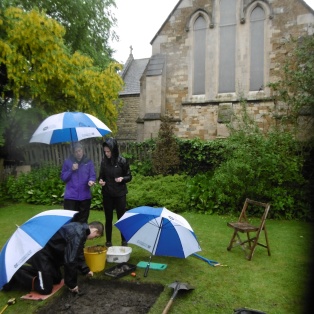 The clay soils of Grimsby proved to be no match for the strength of the students from Ormiston Maritime, Caistor Yarborough Academy and Oasis Wintringham Academy. Indeed it seems we were on something of a ridge between clay and chalk as there was a striking difference between the soils of test pits less than 100m away from each other. In test pit 8, they found a collection of materials, including some pig bones and teeth. According to a neighbour, the garden had been an orchard before the development of the neighbourhood. Pigs are often kept in orchards so this evidence seems to fit! Test pit 3 was also located near to an area that has had some historical investigation as it was next door to a 17th century moated manor. The manor site in fact has earlier medieval origins. The brick and rubble found in test pit 3 could be related to the pathway between the manor and the church. We will know once the pottery discovered has been analysed by a local expert. Results of the analysis will be available here.

Other more modern features were found at test pit 7 with a large amount of molded concrete appearing. The remains of some kind of structure. Another very different feature was found at test pit 7. Right at the end of the day, a clear distinction in the soil was seen on one side of the test pit. It is difficult to tell without further investigation was this cut feature could be though there is some debate about how it relates to the 11th century church as the test pit was right by the eastern end of the church, though several feet below down a bank. Perhaps then the students had reached an earlier level. The results of the pottery analysis will inform us further..

Identification of objects and interpretation of the contexts was given to the participants throughout the two days by Cat Collins, Archaeological supervisor and Alison Dickens the manager of ACA but also a Senior Manager at the Cambridge Archaeological Unit. In her ‘day job’ Alison oversees huge projects such as the 200+ hectare wide excavations at Northstowe. Test pits are a little more manageable. Cat has been an archaeologist for over 16 years now, both at ACA and at various commercial archaeological units were she has worked on a variety of sites and is a specialist in human remains. The benefit of their knowledge is invaluable to guide the students as they complete their first archaeological excavations.

Everyone getting stuck in!

Everyone getting stuck in!

Day 3 of the trip and the students visited Cambridge. Not only is this the first time most of them had visited the town, they got a unique chance to really see the University as well. It was a very long day for them, with much time spent in the coach, but hopefully rewarding. The Day 3 talk by Eoin Parkinson, PhD student, brings together their initial thoughts on archaeology, and explains how they can go about writing up their findings into a clear report. As GCSE coursework has now been dropped, this is one of the few opportunities students have to write and gain feedback on a long piece of their own research, prior to A levels. We hope that the skills they learn from completing the report will stay with them, and give them an advantage when working independently. Being in the surroundings of the University of Cambridge also hopefully inspires the students who are currently in year 10. At this age is it easy to see GCSEs- your first big exam – as completely deciding your future but hopefully we can show the students that there is life beyond year 11. Archaeology won’t be for many of them, but hopefully the skills they learnt of motivating others (despite rain and clay soils), planning their work and time (where to put that bucket, who’s doing the sieving) and academic skills (connecting that piece of clay pipe to the arrival of tobacco in the 16th century) will give them a great start to their futures. We look forward to welcoming the schools again in June when they complete another excavation with their year 9 pupils this time.