Our second dig of the year and are in Rickinghall and Botesdale. Originally separate with Rickinghall being first recorded in the Doomesday book, and Botesdale appearing in 12th century records, the two villages have since grown together over the years. This is our second year excavating here after a successful dig last year, which you can read about here. Once again the local history group supported us in our dig, and we also had the support of two volunteers from Cambridge. 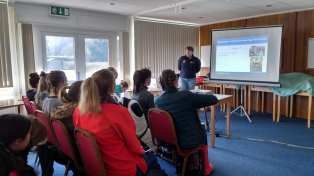 32 pupils from King Edward VI school and St Benedict’s school joined us and arrived eager to start the day. An introductory talk explained to the students how they should go about excavating, but also very importantly, the concepts and ideas that determine why we do archaeology and influence how we interpret what we discover. We know something of the village from historical records, but how will the student’s discoveries in the village change our understanding? The great thing about doing test pits is that we can really get inside the heart of the village to answer these questions. 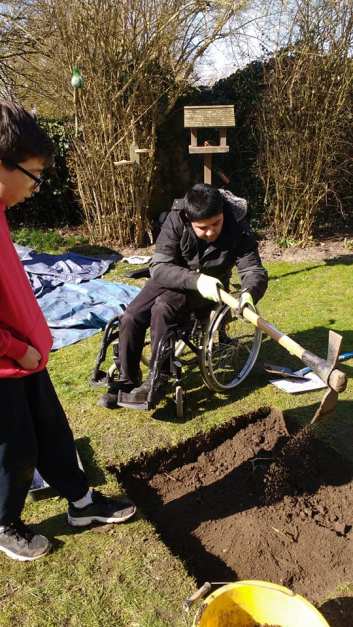 Test pits were nicely spaced out along the length of the village, giving us a good spread to see how different areas of the village have changed. In some places we were very close to where we had excavated last year and it would be interesting to see the difference. With directions from a supervisor, the students set out laden with their equipment to begin digging! The first context always takes the most time but the students had clearly been listening in the morning talk as they laid out the test pit clearly and recorded it accurately. Test pit 1 had a slightly more difficult time, being the furthest away from the base and they also encountering many roots as they excavated. However we were interested to see what we would find in this area as the test pit was opposite the toll house at one end of the village. Further down the street and test pit 2 were bringing up a lot of material, mainly recognisably Victorian and later but it’s always exciting to find objects that you can recognise yourself! At the other end of the village, nearby the co-op Test Pit 8 were excavating in a property which records have shown dates back to around the 15th Century. After their first couple of contexts, the group came down upon a cobbled flint floor- a great feature to find! After recording the floor layer, they continued through it, to understand the date it was laid down. Judging from the pottery it was probably 19th or 18th Century, and there appeared to be a sandy layer beneath. Either another floor or the base of this one. The students had made some great progress on Day 1, buoyed on by the warm spring weather, and went home satisfied with their efforts. 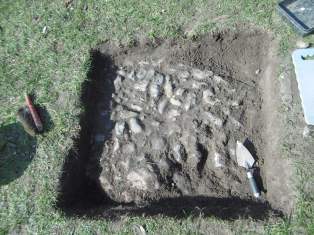 Day 2 and the expert eye of John Newman cast his eye over the pottery finds from the test pits. Confirming that we found our first find of medieval pottery! It’s always exciting for the pupils to find anything from the past themselves, and having an expert like John can help them connect the objects they find with real people and real lives from the past. This is the first taste of archaeology many of the students have had, and certainly the first time they have had a chance to discover artefacts for themselves. It has a big impression and we will look forward to hearing their thoughts and interpretations when they submit with written work. Test pit 4 actually found a huge amount of medieval pottery, which is currently being analysed by Paul Blinkhorn before the report is put up on our website here. Test pit 4 worked very well together and managed to excavate a whole meter down! The upper levels were full of interesting things- like these brass fire tongs, a 1950’s Airfix model and green bottles. A large amount of 13th and 14th Century pottery was found too, some of the earliest we had from the village.  Although we know the records of this village go back further, it is interesting to see what the limits are of the physical evidence. To leave something for future archaeologists to find, Test Pit 4 buried a time capsule of their own at the bottom of their test pit! It included notes from the pupils, a recent coin, some information about ACA and even a BBC microbit! Hopefully something from this collection will survive for future archaeologists to discover and understand why this meter square of land has been disturbed. 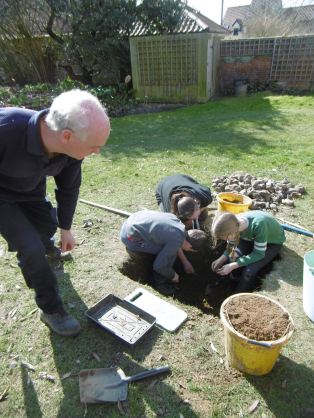 After two days of digging, the students had a good grasp on what it means to be an archaeologist and had also learnt a lot about working together, recording data and identifying objects. Day 3 is about translating these skills into world of Higher Education and showing how they are central to students now. Day 3 of the field school is designed to show them how students at university transform data into concrete knowledge. First then, the students had a lecture from Emma Brownlee, a PhD student at the university. This takes in all stages of writing a report starting with the background of how the settlement developed. Students will need to find out what we already know about the village and understand the influencing factors that might help reflectively explain the evidence we find. Presenting the data is next, and clarity is important here if the students work is to become part of our own archaeological records.  Transforming this data into an interpretation of the past is tricky for many as it requires imagination while also basing those interpretations on evidence. Taking their conclusions further, can we say how our evidence fits in with wider changes happening in the country at the time?

Students work is all part of the wider archaeological record, and a trip to the Museum of Archaeology and Anthropology enforces this. The students enjoyed the session and were able to explore other objects and what they could tell us about settlements. Seeing the wider collections in the anthropology gallery showed them just how broad studies can be, and all the different places in the world Higher Education could take them.  The students really enjoyed being able to investigate the museum but also have a wonder around at their own pace. “I enjoyed finding out more about the local area and it was really good finding things. It was also interesting going to the University of Cambridge and going to the museum.” DS St Benedict’s High School 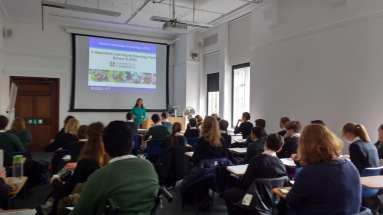 The other side to the day is the experience of university in general. The skills we teach the students can be applied to many different subjects and coming to Cambridge show them all the different subject they could study and ways in which they can learn. Touring either Queens or Emmanuel college showed them how students manage their own work and think for themselves, just as they have been doing for the past two days on the dig. A talk from Robinson SLO Eleanor Humphreys also gave the students about how they can take the next steps to realise their own dreams. The pupils themselves were questioning why they needed to know about university, when they hadn’t even chosen their GCSE options yet. We believe this a is a critical time for pupils however, to enthuse them about their future so that they set themselves on the right path to achieve later. It certainly had that impact on some of the pupils. “I feel like I have been guided about my education and inspired to work hard.” AE St Benedict’s High School. “I feel I have gained a lot of knowledge from the field school. I have tried something new which I really enjoyed and have had reassurance about university and its aspects.” NF King Edward VI School 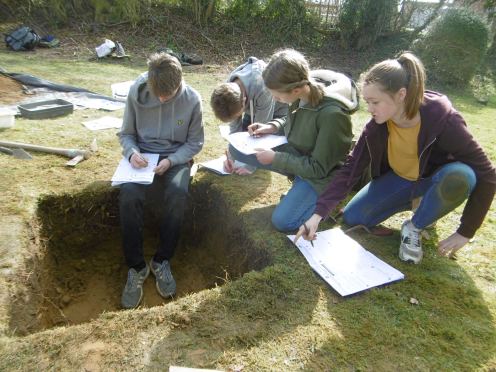 “I feel the Field School has improved my communication and leadership skills, as well as making me consider my future education life. I have gained a lot of knowledge and a love for the subject of history.” FR King Edward VI School. “I think I have learnt how we can interpret finds to gain knowledge about the past and I understand how universities operate much more than I did before.” NP King Edwards VI School.