Over the Weekend of the 18th and 19th of August 2018, a series of 10 1m square archaeological test pits were excavated in the pretty village of Wendens Ambo in west Essex. The dig was organised through the Wendens Ambo Society with money through the Heritage Lottery Fund and aided by Access Cambridge Archaeology (ACA).

Over 70 local residents and volunteers of all ages turned out to hear Cat Collins from ACA give a short briefing in the morning (after the obligatory group photo of course!) talking about what has already been found in Wendens Ambo from the previous two sessions of test pitting with local secondary school children; all the results of which can be found on the ACA website. 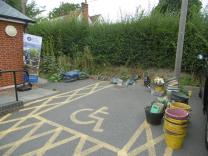 The test pits were mainly sited in the west of the village along Royston Road and Duck Street and around where the test pits from previous years had already been dug with a few new sites added in. The village side of the organisation was undertaken by Susan Watson of the Wendens Ambo Society, who took on the responsibility brilliantly of finding the test pit sites, as well as organising the paperwork, the volunteers, the village hall that was used as a base and giving all the volunteers their own commemorative water bottle!

Three archaeologists were on hand to offer advice and support over the course of the excavations, Matt Collins, Senior Project Officer at the Cambridge Archaeological Unit and Emma Brownlee, PhD student at Cambridge joined Cat from ACA for the weekend. Emma was also in charge of coordinating the feedback being collected by local teenage volunteers and it was the expertise of the archaeologists, and their ability to pass on their knowledge that was something which was praised by many of the participants, who appreciated the chance to learn. Volunteers enjoyed how ‘the expert’s ability to look at something and turn it into a bit of history’, helped the dig come alive for them, and ‘the benefit of expert help to identify your findings’ helped participants learn more about what they were excavating. 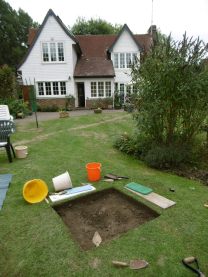 The majority of the local residents excavated in their own gardens with help from friends and family, whereas others worked with people they hadn’t met before or were new to the area. One of the test pits was also sited on The Wick Recreation Ground, which meant that it was visible to passers by to also get involved. In feedback, the volunteers commented ‘had lots of people stopping by’ and ‘everyone walking by taking an interest, asking us what we had found’. 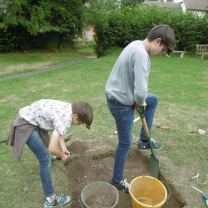 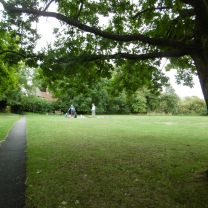 The community aspect of the excavation was one of the most enjoyed parts of the weekend with multiple people praising  the atmosphere and the fact that such a wide range of people, you and old were involved: participants described it as ‘a great family event’, ‘it was good to see such a wide age range involved’,  ‘the whole neighbourhood was involved’, and’ ‘It increases the sense of belonging to an area and being part of a community’. This was further enhanced by a community BBQ on Saturday evening for all the volunteers and their families and was highly praised by all as it continued to enhance the whole community feel in the village. 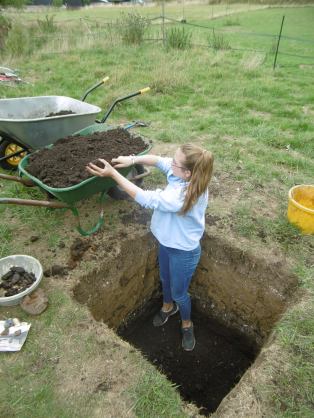 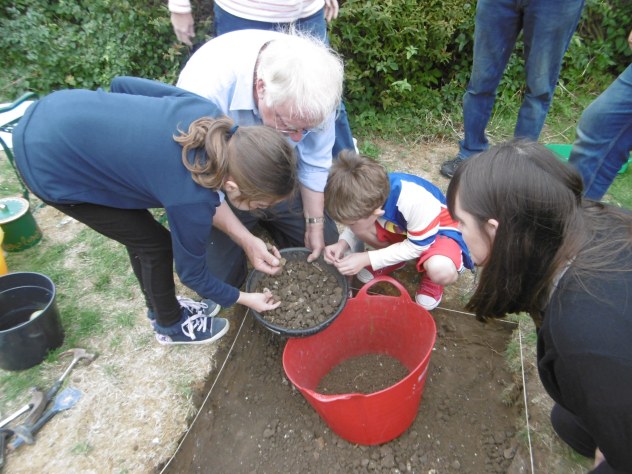 Everyone involved in the test pitting had the opportunity to learn new skills ranging from excavation, finds washing, planning and section drawing and evaluation. In feedback after the weekend, 86% of people said they enjoyed learning how to do something new, 88% of participants either agreed or strongly agreed that they had learnt new archaeological skills, and praised this as one of the most enjoyable parts of the excavation: ‘It was great to learn how to dig properly’ and ‘a fun day spent with neighbours/friends outside learning a new skill’.

Children, as well as adults, learned new skills from the weekend, and participated alongside their parents. The experience was described as ‘Fun for all the family (and a 14 month old baby)’. One participant praised how good the archaeologists were at explaining to the children what was being found and why it was important. One nine year old participant most enjoyed ‘learning how to dig like an archaeologist’. There was an additional session of archaeological activities for the children of Wendens Ambo on Saturday afternoon before the BBQ, in which Cat Collins led the children through a series of hands on activities to learn more about archaeology, which was enthusiastically received by the children (and parents) who took part! 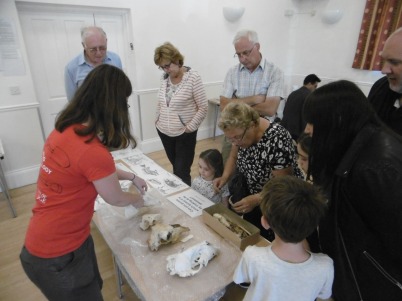 On the Sunday, the excavations continued, although a couple of the test pits were able to finish by the end of Saturday, either already reaching natural or just running out of time. The finds were being brought back to the village hall throughout Sunday so the archaeologists could start sorting through the finds, as there was also a competition for the oldest archaeological find, for which there would be a prize for the winner! One of the early contenders was TP 24, based on land at Westbury Barn, which came across a thick layer of peat at quite a depth. The course of the stream was moved with the construction of the M11 motorway during the 1970’s and it is likely that the area around the test pit may have been once part of this river course, or the lowland immediately surrounding it. At the base of the test pit the finds mainly consisted of fragments of natural wood that had preserved very well in the peat as well as a number of sherds of 12th century medieval pottery and one sherd of Late Anglo Saxon pottery! The pottery report of the test pit excavations can be downloaded here.

Two of the test pits, one in a relatively modern house on Duck Street and the other sited within Jubilee Wood off Chinnel Lane, actually yielded the two oldest pottery finds of the test pitting. Both recorded sherds of Late Bronze Age pottery, with also the pit on Jubilee Wood revealing a single sherd of Iron Age pot. Both of these sites are the first in the village to produce prehistoric pottery through the test pitting strategy, which was very exciting and hints at a focus of later prehistoric activity in the west of the village and close to the known Roman Villa site, now under the M11 motorway. A good amount of lithic material (worked flints and burnt stone) were also recorded through a number of pits, which is although yet to be examined by a specialist are likely also to be a similar date of Bronze Age or even earlier, dating as Neolithic.

Cat Collins led the sum-up at the end of Sunday, which was a great chance for everyone to come together again, as well as looking at the finds that Cat had talked through. Someone from each test pit group also said how they thought the excavation went, what the best finds were and how deep they were able to excavate to. In feedback, 98% of participants rated the excavation as either excellent or good with 83% saying they enjoyed it more or much more than they anticipated and 97% said they would recommend taking part in a community excavation like this to others, with the most commonly mentioned reasons for this being because it was ‘fun’, because of the opportunities to learn more about where you lived, and because it helped bring the community together. 86% of participants said there was nothing about the excavation that they did not enjoy, and the only negative recorded was the hard, physical nature of the work, especially when it came to backfilling the test pits at the end of the two days.

The excavation was an opportunity for participants to learn more about where they live as well as actively engage in heritage. 68% said that they felt they knew more about the history of Wendens Ambo than they did before, and 70% of people enjoyed learning more about Wendens Ambo. It was described as an ‘a great opportunity to learn more about your village’ and ‘we are spending a great family day discovering so much more about where we have lived for over 30 years’. Being able to contribute to knowledge about Wendens Ambo was one of the most enjoyable aspects of the excavation: 68% of participants enjoyed knowing that they were doing valuable archaeological research, and 84% enjoyed the experience of finding historic objects. One participant put their enjoyment of the excavation down to the fact that ‘able to contribute, if only in a small way, to the corpus of knowledge, is a privilege not often available’.

The project has also inspired residents to become more engaged with heritage in the future: 76% said they would take more interest in the archaeology and heritage of Wendens Ambo in the future, while 86% said they would take more interest in archaeology and history more generally. Many of the participants would recommend the experience to others because it was a great way to learn about history. 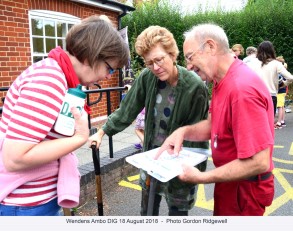 Overall, the test pitting weekend was both hugely successful and positive experience for the volunteers and in terms of archaeological results. Thanks must go to the HLF, Sue Watson and the Wendens Ambo Society and Emma Brownlee for collating all the feedback.